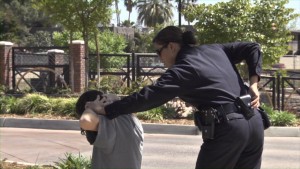 © BE SAFE The Movie

In response to these events, the Santa Clarita Valley community began discussing ways to improve law enforcement’s interaction with people with disabilities and other functional needs. Particular focus was given to improving communication and sharing information.

Santa Clarita established a voluntary paper registry of individuals with disabilities and other functional needs in October 2004. The primary purpose of the registry was to provide key information about individuals with disabilities to the Santa Clarita Valley Sheriff’s Station in advance of an emergency or encounter with law enforcement. Families submitted background information, physical descriptions and photographs for individuals to be included in the registry, which was securely maintained by the Sheriff’s Station. Families also submitted information about locations that the individual was likely to wander in case he or she went missing.

In 2005, Santa Clarita linked the registry with Project Lifesaver, a program designed to assist Santa Clarita Valley deputies in locating individuals with medical needs, such as autism or Alzheimer’s disease, who had a tendency to wander. Individuals in the Project Lifesaver program wore a bracelet that was tracked by radio frequency-based equipment housed at the Sheriff’s Station. The Project Lifesaver tracking equipment worked to locate a missing person who was within a specific range of distance away from searchers. Unfortunately several deputies reported that the radio tracking system was not convenient to use. 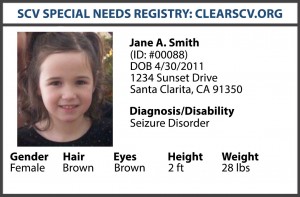 In late 2009, Santa Clarita converted the paper registry into an online registry to better serve the community. The online registry allows individuals to register from home; law enforcement personnel can view updates to the registry in real-time.

Individuals who participate in the registry or register someone in their care can print out Special Needs Registry Identification Cards that contain information from the registration form. These cards can be presented to law enforcement personnel or responders in the event of an emergency.

Registry users can print as many copies of the card as they need. Users should update the cards regularly, especially when any of the information on the card changes.

The online registry has greatly improved the effectiveness of search and rescue operations for persons with disabilities and functional needs in Santa Clarita by eliminating the need for gathering information prior to commencing rescue operations. On one occasion, law enforcement personnel located a young boy who had eluded his caretakers by using the registry to gather the boy’s photograph, his physical description, and the location where the boy was likely to have travelled.

In addition, the registry has been particularly useful for search and rescue operations involving individuals who go missing repeatedly. When law enforcement personnel conduct a search for a person with a disability or functional need who is not registered, that individual is encouraged to participate in the registry upon rescue.

In January 2011, Santa Clarita phased out Project Lifesaver radio-based trackers and replaced them with cellular Emfinders trackers. The Emfinders trackers allowed law enforcement personnel to track individuals throughout the country instead of only within Santa Clarita. Unfortunately Emfinders ended their program in July 2012. Santa Clarita is no longer sponsoring any kind of tracking system. Residents who wish to purchase and use individual cellular tracking devices or other technology for family members are encouraged to do so.